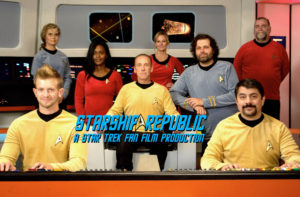 Last time, we chatted with Ray Tesi about one of the newest fan projects, Starship Republic.  Filmed at Starbase Studios before it recently moved from Oklahoma City to Arkansas, the fan production just released a short vignette and launched an Indiegogo campaign with a $16,000 goal.

One of the most intriguing things about Starship Republic is the fact that show-runner Ray Tesi actually reached out to John Van Citters of CBS Licensing to review their crowd-funding campaign and give feedback on whether or not there was any problem with them distributing unlicensed perks…both physical and digital.  And so far, CBS sees no issues with Republic doing just that.

We also learned a little about what will make Starship Republic unique…specifically aiming for a look and feel that reflects more modern cinematic techniques rather than trying to faithfully recreate the style of the 1960’s era original series episodes.

And now it’s time to conclude our interview with Ray as we learn more about how the production came to be, how they found their cast, what it was like to actually produce the project, and what’s in store for the future…

END_OF_DOCUMENT_TOKEN_TO_BE_REPLACED 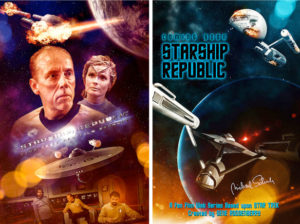 Now, this is intriguing!  If you look about half-way down the fan film guidelines to the second-to-last point under #6, you find the following:

No unlicensed Star Trek-related or fan production-related merchandise or services can be offered for sale or given away as premiums, perks or rewards or in connection with the fan production fundraising.

That seems pretty straightforward.  If you want to give away any perks, they have to be licensed Star Trek merchandise.  You can’t give any patches or T-shirts or signed scripts or posters or anything related to your fan production in exchange for donations…at least if you want to make sure you aren’t sued or sent a cease and desist letter by CBS and Paramount.

So how was it that STARSHIP REPUBLIC, the newest fan film to launch a crowd-funding campaign (and the first to do so since the Axanar settlement), was offering a whole set of perks?  Sure, most perks were digital, but there were also physical posters in the mix (like the two images shown above).

Well, it turns out that they simply asked CBS for permission–and they got it!  Well, kinda…